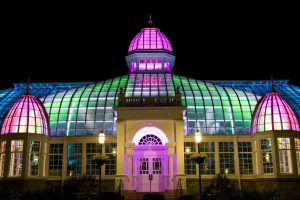 If you grew up in the Midwestern United States chances are you know that Ohio is home to Kings Island and Cedar Point Amusement Parks. But did you know that the Buckeye state is home to many other enchanting places to explore? If you are heading to Ohio this year for summer fun in the sun, consider these stops as you head toward your final vacation destination.

If you are a lover of natural beauty, then you should pay a visit to this beautiful botanical garden in Columbus. Here you will find hundreds of plants, a rainforest garden, and one hundred species of butterfly, a bonsai area, and a model railroad train that runs through the park.

The Ghost Ship: Outside of Cincinnati

This 186-foot steam-engine yacht is over a century old and first launched in the spring of 1902. At that time, it was called “The Celt” and was owned by a rich railroad executive. That ship has gone through many names and owners over the years and is said to be haunted. There have been many stories about where the ship came from, its history, and how it came to be stuck in the tributary where it now rests. Whatever the truth may be behind its journey, it is surely spooky to view in its current location.

An Ohio resident by the name of Walter Soplata hosted a collection of military aircraft from the 1950s through the 1970s in his yard. This collection came to be known as the Newbury Airplane Boneyard and featured more than 20 stray aircraft (whole, parts, and pieces) that had been collected by Soplata at his scrapyard job in Cleveland over the years. The property was open to the public for a number of years but has since been closed and kept private. Collectors and those who are curious about what still sits in the graveyard can contact Soplata’s son for more information about viewings.

This outdoor museum and sculpture park is an art enthusiast’s dream space. It features a 10,000 square foot Ancient Sculpture Museum that is home to a number of Egyptian, Greek, Roman and Etruscan sculptures. Each of these works of art was created more than a few thousand years ago and are spread throughout the land in the park.