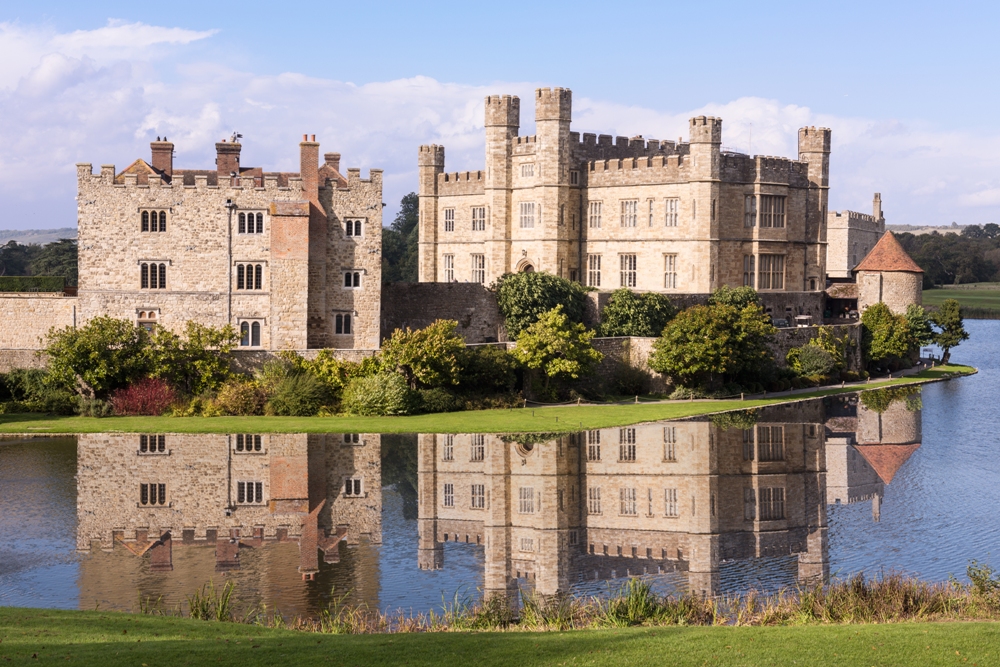 Leeds Castle of Kent, England – Leeds Castle has been a place much revered by the royal families that have graced its grounds, from Queen Eleanor to the likes of King Henry VIII himself.

Situated as most castles in historical lore, Leeds Castle is surrounded by a “moat,” only this lovely body of water is much removed from the average moat that probably comes to mind. The fortification wall built at the edge of where the castle meets the water dates back to the time of Queen Eleanor, the Spanish queen of Castile. During Eleanor’s time, this fortification, or revetment, wall surrounded the castle, rising some thirty feet into the air and reinforced by bastion towers. The towers are still visible; however, only one of them retains its full height, and the others have eroded to the height of the walls adjoining the castle.

The Gloriette (the building on the smaller of the two “islands”) was constructed during Eleanor’s time in the castle. This is inferred due to its name, Gloriette, which derives from the Spanish word for a dome or tower that is erected in an intersection of the pathways within a garden. While today’s Gloriette’s layout is not the original, it is thought that a chapel was once in the same location.

King Henry VII never desired to call Leeds Castle home; however, his son, Henry VIII, did. In fact, while it was once utilized as a stronghold for the royal military, Henry VIII felt it was destined to become the destination of he and his wife, Catherine of Aragon. He had the castle reconstructed into a palace of royal and magnificent comfort.

Sir Henry Guildford, the supervisor of the reconstruction, passed away in 1532 and, upon his death, an inventory of the castle’s stock was taken. From that inventory, it is known that the palace’s apartments were located within the Gloriette and that King Henry VIII had had an upper floor added. Fireplaces in this upper level were decorated with the Spanish royal arms and motifs, suggesting this floor had been reserved exclusively for the Queen.

Twenty years later, the castle would leave royal ownership and become the property of Anthony St Leger in exchange for his unwavering dedication to King Henry VIII during Ireland’s uprising.