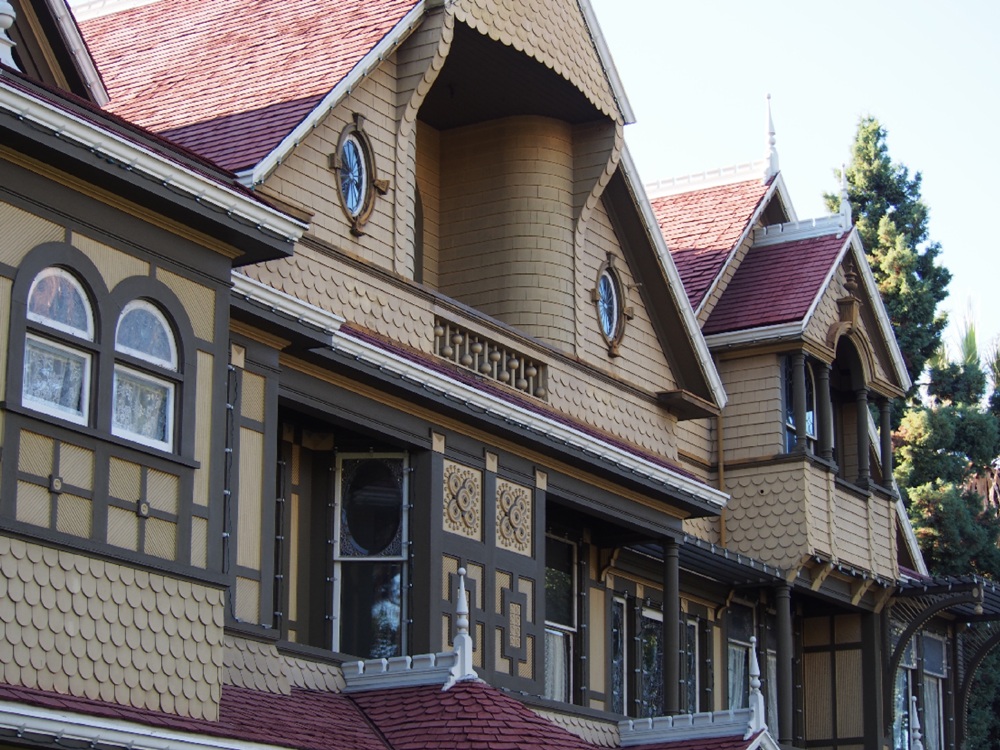 At one time, this home was the largest private residence in the United States, and the most expensively built. Today, however, if you’re not looking, you just might miss it. Winchester Mystery House now has eight lanes of freeway zooming past, a trailer park nearby, and the remains of a decrepit movie theater not too far away. While the world grew around it and changed with the times, the Winchester mansion remains defiant.

Sarah Winchester, widow of gun magnate William Winchester, bought the property and the unassuming eight-room cottage in 1886. She had inherited a massive fortune after her husband’s passing – which included wealth from her father-in-law who had passed a year before her husband. Very shortly before her husband’s passing, she had given birth to a baby girl who also passed just one short month after birth. All of this death around her, she decided to consult with a medium. This medium told her that, due to the family’s hand in so many deaths resulting from the Winchester rifle, that she was cursed and haunted by all the spirits of those who had been killed.

Sarah moved from New Haven to San Jose and oversaw the building of her grand mansion – which legend holds that she built in order to confuse the spirits that she constantly could hear around her. She hired contractors and carpenters for the building at three times the then-current rate of pay, and they worked in shifts 24 hours per day from the time she bought the home until she eventually passed away in 1922.

The home at its grandest point had 200 rooms, 45 fireplaces, 2,000 doors (many of which went nowhere; one of which opened to what would be a fall of nearly 400 feet to the garden below), and around 10,000 windows. Locating the original eight rooms would have been a feat even for Sarah. The great earthquake of 1906 devastated much of the home, but it has since been renovated and tours are given daily. One hundred and ten of the 160 rooms are included in the Mansion Tour, and the remaining portions of the home (many undisturbed for nearly a century) are now open to the public as part of the Explore More Tour.