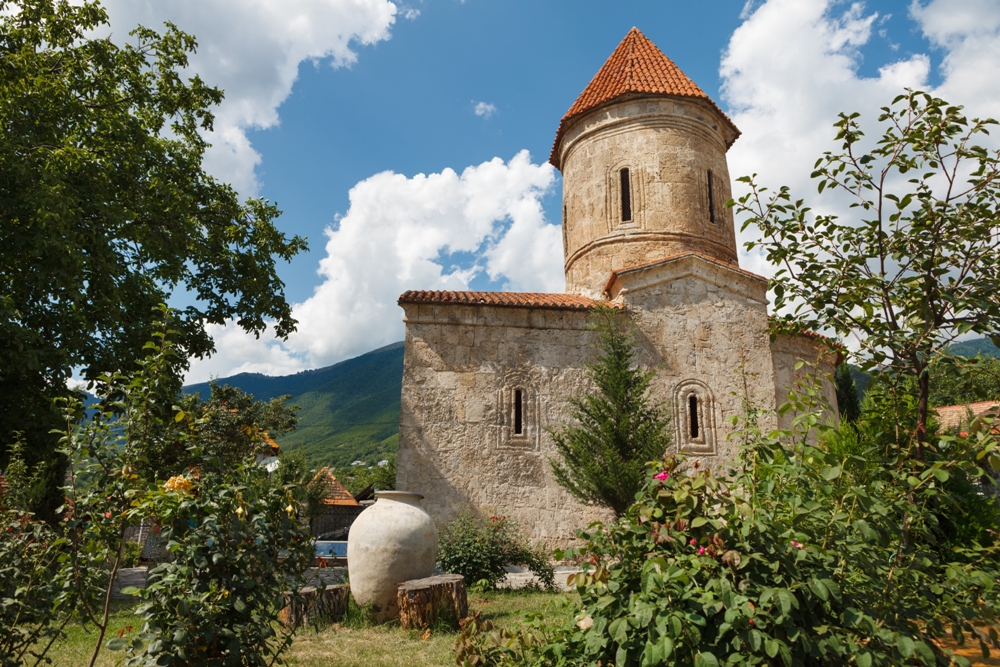 A mere shadow of its glory of the past, Kish is now a tiny village with just over 6000 locals. Kish is located about ten miles to Sheki’s north. Relaxation is what vacations are all about and rambling through the quietly quaint cobblestone streets, that’s exactly what you’ll find. While Kish resembles any general mountain village, it had that “something” that other villages lacked. Visiting Kish today, you wouldn’t ever guess that this was once a place of great importance, but that is actually the most appealing reason to visit.

In the first century AD, one of Thaddeus of Edessa’s disciples arrived in Gis. He promptly saw the need for a church and built one. St. Elishe’s Church quickly became the center of spirituality and enlightenment for the peoples of the region and throughout the East.

Gis was changed to Kish, and quite rapidly became a hub for both religion and politics. This was the original capital of the region and all activities revolved around Kish for many centuries. However, Mother Nature had other plans. Major flooding throughout the centuries caused the indigenous peoples to eventually move the region’s capital city to nearby Sheki, where it grew even more and flourished.

Kish is surrounded by valleys, and many of its alleys are not meant for motorized traffic. It is in these backstreets, however, where you will find glimpses of ordinary Kish life. The village does not have running water, so the locals get their water from springs in the area, which are considered great meeting places at which to gossip and overall catch-up with town happenings.

On the cobblestone streets you’ll see children at play, old men chatting about their farms, and women in traditional garb going to fetch their days’ supply of water. In the valley lie the ruins of the Gelersen Gorason Fortress which is a great opportunity to take in some of the region’s history. However, much of the valley has been converted into resorts for tourists which has taken away somewhat from the pristine nature of the area. It is highly recommended for vacationers looking for an authentic stay, to try a “village home stay.”