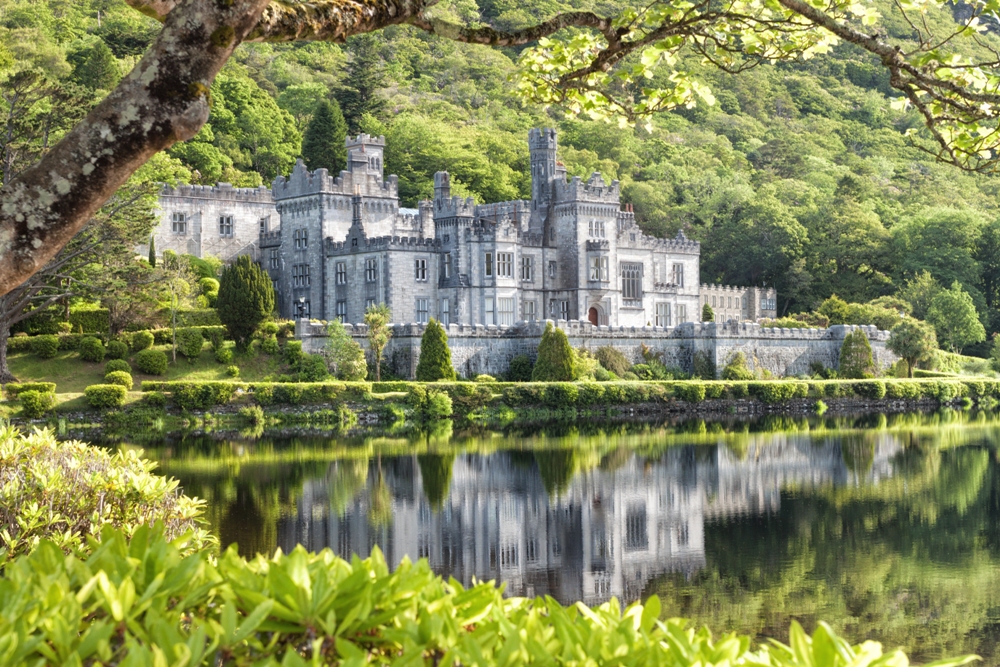 Kylemore Abbey has a remarkable history spanning more than 150 years tragedy and triumph, romance, modernization, edification, and sanctity. Kylemore was built in 1868 as a magnificent castle, and since 1920 has been the sanctuary of Benedictine nuns.

When the ravages of World War I destroyed their Abbey in Belgium, the Benedictine nuns were given Kylemore Castle in order to begin anew. Once settled into their new Abbey, the opened a school for girls that would become renowned the world over. They also then began the painstaking restoration of portions of the castle that were in disrepair, as well as built a Gothic Church, and restored the walled garden to its former glory.

Many myths and legends surround Kylemore Abbey, not the least of which is that of Cu Chulainn and Fiona McCool. According to the legends, these “heroes” often battled each other atop the Connemara mountain range. The legend depicts these characters as gentle giants. Fiona lived atop The Diamond, a mountain aptly named for its distinctive exposure of quartz which sparkles as the sun rises. Located in what is now Connemara National Park, this mountain faces Kylemore Valley.

Cu lived on the other side of Kylemore Valley on a mountain called Duchruach, which means Black Stack. Duchruach is the mountain that shelters Kylemore Abbey. This mountain is named for its uncommonly black stone, and is readily identifiable amongst the other mountains of the valley. Cu and Fiona had hot tempers, according to the legend, and frequently had “altercations.” It is said that during one of these heated battles, that Cu hurled a large stone directly at Fiona, narrowly missing her. It landed at a weird angle and remains in the same position, on the estate of Kylemore Abbey. The stone’s shape resembles a clothing iron.

Because of its shape, it earned the name The Ironing Stone. Children in the area treat it as a stone at which to make wishes. The legend goes that if you stand with your back to the stone, make your wish, and throw a pebble back three times over The Ironing Stone, your wish will be granted.

Do you wish to try your luck at The Ironing Stone? The nuns at Kylemore Abbey invite you to discover the tranquility, magic, and pure beauty that make Kylemore Abbey one of the most loved attractions in Ireland.