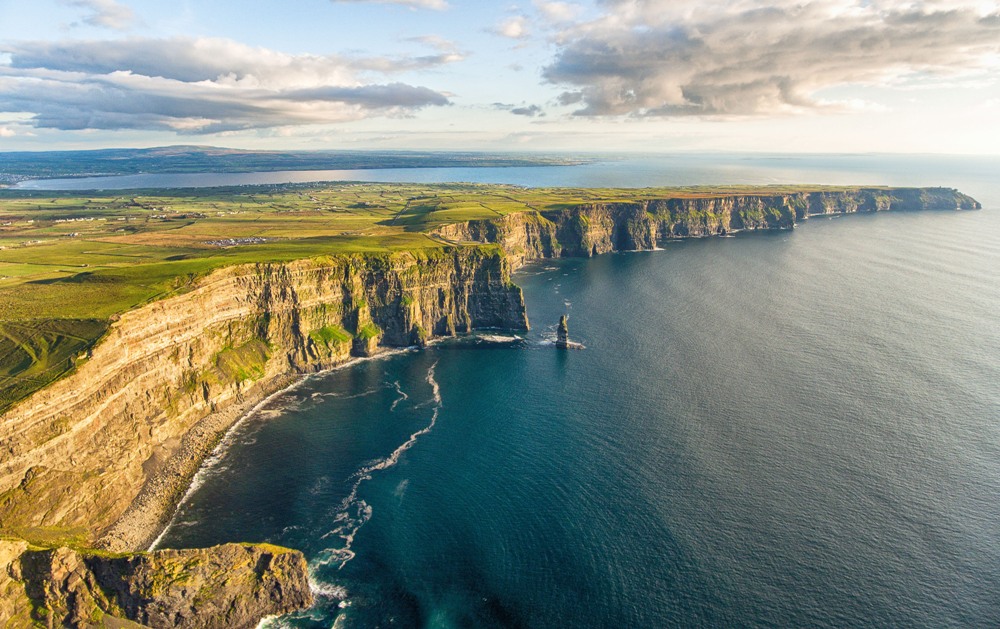 Ireland’s Cliffs of Moher- In 1588, a fleet of ships set sail to invade England. This fleet, the Spanish Armada, had planned on invading and conquering England. When their mission was not successful, the commander, the Duke of Medina, turned his fleet around and began sailing for home. But instead of sailing back the way they had gone, they sailed northward to loop around Scotland and slingshot around Ireland. The ships met with blustery, wild storms and were nearly entirely decimated along the way.

On September 16, 1588, Boetius Clancy was Clare County’s High Sheriff when he noticed a fleet of troubled ships out to sea. It troubled him that Ireland could be in danger. He wondered, was this fleet set to invade Ireland? When he reported his findings to Lord Deputy Fitzwilliam, Clancy was told he must capture and execute any Spanish shipmen found.

All but two of the entire armada of ships had sunk before Clancy was able to reach them. The final two ships, carrying 696 men together, sank off the reef near Mutton Island just four days later. Of all the men aboard the armada, there were less than thirty survivors. Clancy immediately took them as prisoners, and all were hung in a mass execution at Spanish Point. They were then buried at Tuama na Spaineach within a mass grave.

One of the most famous names to be associated with the Cliffs of Moher is that of Cornelius O’Brien. He lived at the Birchfield House in Liscannor in the 1800s, and is responsible for the building of O’Brien’s Tower at the Cliff’s highest point so that visitors to the area had a place from which to view. He is also the one who built the wall along the edge out of flagstone from Liscannor. The remains of this wall that lie within the Visitor’s Center grounds have been restored to their former glory.

This particular flagstone was quarried throughout the 1800s and into the early 1900s. It was an amazing industry for the region at that time. The flagstone quarries of Liscannor were quite prosperous, enough that an entire village came into being surrounding the mines at Doonagore. Liscannor was officially on the map as it shipped this beautiful stone as far away as London. However, World War I was on the way, causing the mines to close.

In the mid-1960s, several of the mines around Liscannor reopened. These mines are still open today, a testament to the heritage of the Cliffs of Moher.