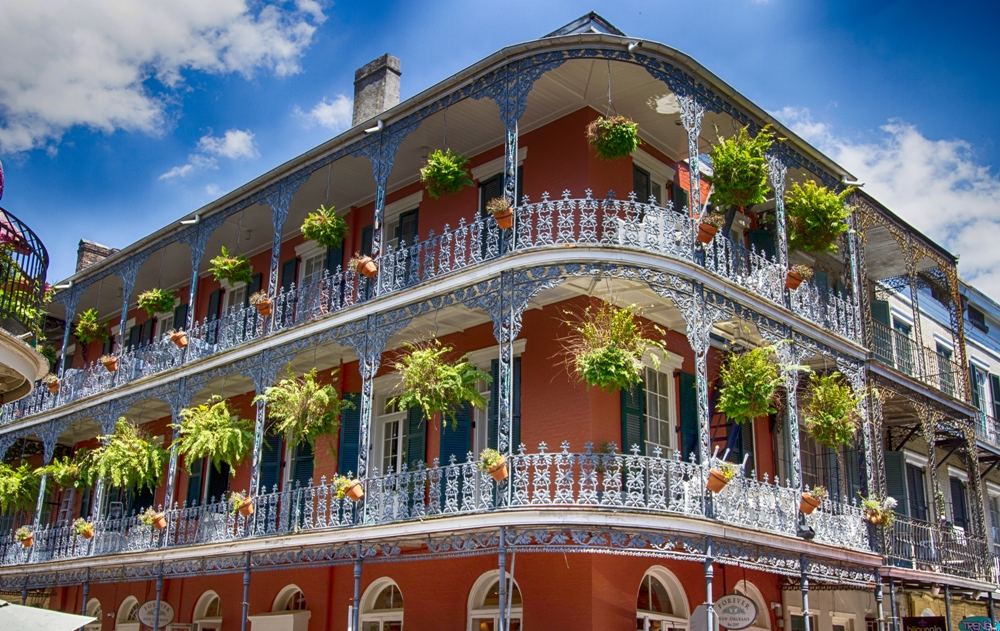 There are five separate buildings (numbered 100-500) that comprise the Hotel Provincial of New Orleans. Each building has its own colorful history. The hotel’s current owners purchased the property in the late 1960s and restored the buildings to better than their former glory. The first owner of the property on which 100 and 200 sit was a French Lieutenant, de Granpre, who was able to acquire the land thanks to King Louis XV.

De Granpre owned the land for 75 years, then selling it to Chevalier Lavillebeuvre, who owned it for a further 17 years. At the turn of the 19th century, the Lauran and Roque families put their funds (and their heads) together and purchased the land from Lavillebeuvre, further developing it throughout the 19th century. In the early 1900s, the existing structures were sold to the French Market Ice Co.

In 1958, the Great New Orleans Fire turned the buildings to ashes. An enterprising family, the Dupepes, purchased the land, rebuilt buildings 100 and 200, and opened a reduced version of the Provincial. Their venture proved to be a successful one, and as their profits grew they reinvested in their venture by purchasing other nearby properties and adding additional buildings.

The land occupied by building 300 was originally the New Orleans Colony’s garden in which they grew the medicinal herbs utilized by the hospital. It was used thus throughout the 1700s. The hospital was on the same street. The New Orleans Colony eventually sold the plot of land to New Orleans’ Archbishop who held the land for several years but did not do anything with it, selling it in 1820. About five years after the sale, the new owners had built a gracious home with additional housing for their many slaves. At some point, it may have also been converted into a hospital for the wounded during the Civil War. When the Dupepes bought the land in 1967, they incorporated the buildings as part of the Provincial once again.

Buildings 400 and 500 also have a storied history. Building 400 was originally a business in the 1830s which had the living area on the top floor. Building 500’s land was originally occupied by nuns of the Ursuline order for over 130 years. There was a hospital on the land circa 1722, and then two glorious mansions in 1831. The homes were ravaged in a fire in 1874, but not soon after, what is now Building 500 was built. The Dupepes purchased it in 1969, finally completing their life’s work of creating The Hotel Provincial.