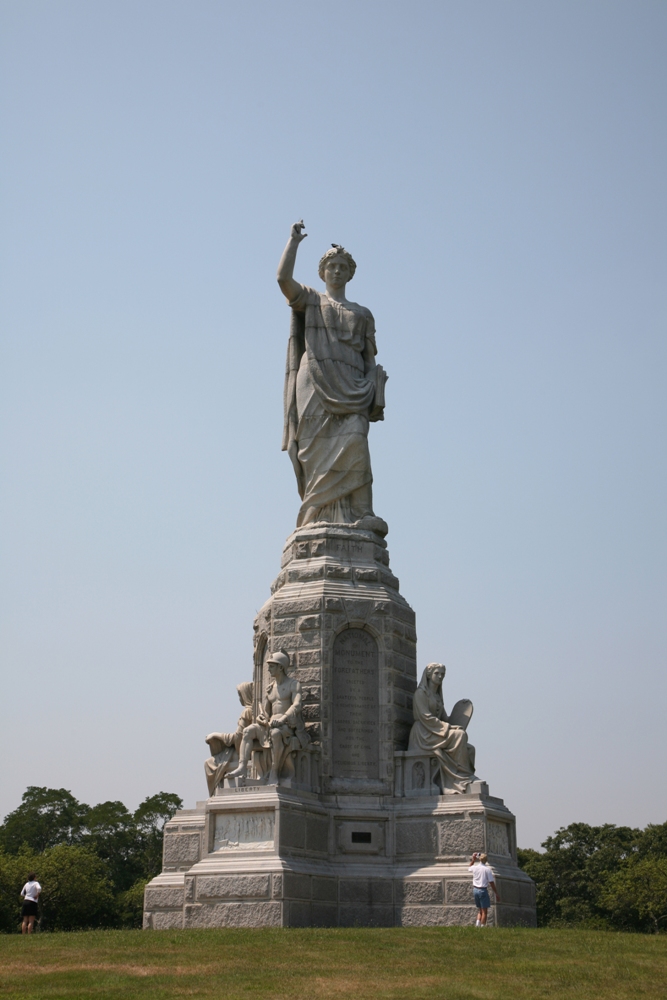 In an effort to raise awareness of the Pilgrims, those residing in the New England states in the 1800s decided to create something majestic.

The Pilgrim Monument (as it was originally called) is now known as the National Monument to the Forefathers. It greatly succeeded, and at more than 80 feet tall, it is the tallest sculpture in the united States made entirely of granite. Hammatt Billings was the sculpture’s designer, but he did not live to see its completion, dying fifteen years before it was finished.

When the sculpture was first finished, in August of 1889, it sat high aloft an outcropping that had no trees that overlooks Plymouth Harbor. One hundred and twenty five years’ worth of tree growth has since encapsulated the statue, and it is no longer visible. It is tucked amongst a quaint neighborhood, giving it an anonymity barely befitting of something so grand. In fact, Billings had originally wanted his finished design to be doubled in size, but the Civil War caused funding for things of this nature to all but dry up. Simply put, if you didn’t know it was there, you would miss it.

At the top of the sculpture is a monument to Faith. This portion of the monument itself weighs 180 tons. The entire monument encompasses thirteen statues in all, with dedications such as Liberty, Education, Youth, Mercy, and Tyranny. Thanks to inscriptions on each of the statues, even modern-day people can understand the intended symbolism of the time.

Kirk Cameron, who is most beloved for his role in the 80s and early 90s on Growing Pains, and more recently for his role in the Left Behind series, wrote a documentary film on the subject of this national monument, bringing back into the periphery for those who had forgotten, and introducing it to those of us who didn’t know of its existence. In the documentary you’ll learn how the Statue of Liberty, which had actually been completed about three years prior, was influenced by Billings early designs of his monument to our forefathers.

Located at 72 Allerton Street in Plymouth, the National Monument to the Forefathers is open daily sunrise to sunset, and there is no admission fee as of the time of this printing.