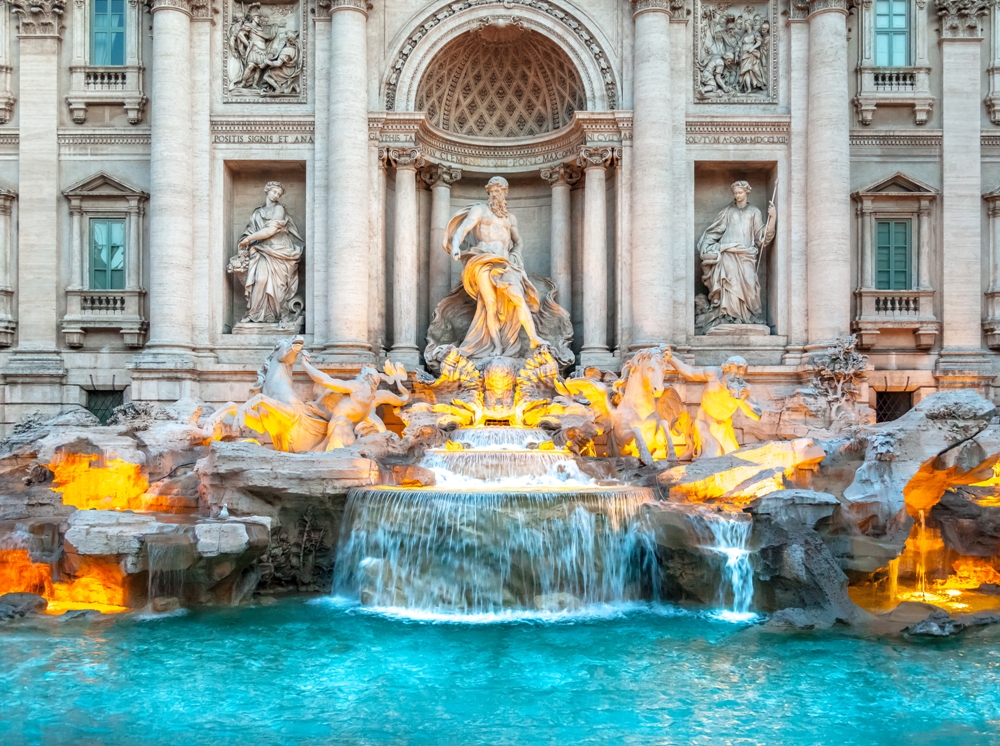 The Trevi Fountain in Rome towers above, nearly 86 feet into the air, and nearly 161 feet long. Each day, the fountain runs over 21 million gallons of water. It was designed with three basic focal points – a travertine façade, Carrera marble statues, and a travertine “reef.”

At the center of the display is the over 16-foot-tall Ocean statue by Bracci. The body of the statue, while muscular, resembles overindulgence. His beard is abundantly long. His stature is both fiercely masculine, while also that of a gentleman. His right hand holds a commanding wand, while his left carries a cloth that covers his nakedness.

Two Tritons command the horses that pull Ocean’s chariot. One horse is relaxed and calm, while the other seems restless. These mirrors of the duality of nature are further illustrated by young, strong appearance of one of the Tritons, while the other is much older and carries a gnarled seashell used for announcing his passing.

Abundance’s statue is in the left potion of the archway. She holds the famous cornucopia, and at her feet, a toppled urn, overcome by the sheer abundance of water overflowing its edges. Over her head is stonework illustrating the God, Agrippa, commanding the construction of the Roman aqueducts.

Health stands tall in the right portion of the archway, a laurel wreath for a crown, holding a cup of water from which a snake sips. The stonework above her illustrates the Virgin leading the weary soldiers to this water of life.

The sight of the Trevi Fountain is an imposing one today, and quite possibly was even more so when it was the show piece for the Romans illustrating their invincibility in aqueduct construction. The aqueduct to which the Trevi Fountain refers was designed by Agrippa and was over forty miles long, nearly thirty of which were beneath the ground. The same source still provides the water to the fountain. While a great portion of the aqueduct was harmed during the Ostrogoth invasion, the Trevi Fountain still serves as an important testament to the feat the Romans conquered – the ability to provide abundant water to their people.